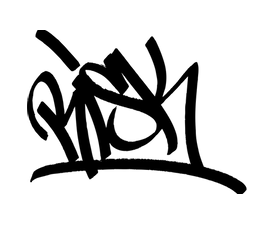 Multi-talented fine artist, sculptor, and graffiti pioneer Kelly “RISK” Graval has been synonymous with the Los Angeles art community for decades. With a career spanning over 30 years, Risk has solidified his place in the history books as a world-renowned graffiti legend and contemporary artist. From his early days as a founder of the West Coast Graffiti movement to gallery and museum exhibits around the globe, Risk has transformed from a street artist to a rising star in the contemporary art world. His work has been shown in top galleries in LA, San Francisco, Toronto, New York, Miami, and London. His work has also been featured in major museum exhibits including the 2012 “Art In The Streets” at the LA MoCA and the hugely successful “Beyond The Streets” exhibits in Los Angeles and New York. Risk has been compared to the Ferus Gallery movement by art academia. “Being called the new generation of the Ferus movement is the biggest compliment anyone could give me. They have been a huge inspiration to me. I have had the opportunity to meet and work with some of the original Ferus Gallery artists, Including his hero Ed Moses.”